Now that I had the VFO and controller completed, it was time to start putting the transceiver circuit board together.  This is a very nice double sided board with plated through holes, and good silkscreen on the top for parts placement. I started with the receiver portion, and checked that I had good audio to the headphone jack. 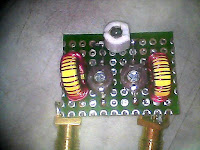 Since I am making this cover the whole 7Mhz band, I had to replace the single crystal input filter with a double tuned band pass filter. I wired this up on a small piece of perf-board, and tack soldered SMA connectors so I could easily connect to the SNA Jr.


I could have used the Chinese SNA for this, but I decided to go with the SNA Jr.  I like to use the SNA Jr. for quick alignments because it is small and self contained.   Do not have to connect to my computer and run the software on there,
I set the frequency range from 5.5 to 8.5 Mhz.to put 7 Mhz on the center graticule., and set the SWEEP mode to FAST.  This mode is a reoccurring display instead of a one shot like the other SWEEP modes.  Took just a few minutes to adjust both tuned circuits, and the coupling capacitor.  Much faster than other methods I have tried in the past.


Now to put it in the circuit, connect up the VFO signal and see what I get.  After I connected everything I found that the receive level seemed to be a little low, and there was a constant tone on the signal.  I quickly rewired the input filter as a single tuned circuit, and that brought up the signal level.  Tuning across the band, I decided it would be adequate selectivity for normal operation so will leave it as is.  Looking at the values for the input filter, low-pass filter on the transceiver, and low-pass I put on the VFO board it would be no problem converting this to 10 Mhz. operation.  Just different tuning of the input filter and changing frequency settings in the Arduino code.  I had included a couple of extra Arduino pins when I did the circuit board, so could even add a relay and with a little code change make it a 2 band rig.

The other problem I found was the constant tone. Since I was using a separate transmit and receiver oscillator, I found that I was picking up the transmit signal all the time.  A little change to the code to toggle  the transmit  oscillator off  when receiving took care of that.  With the selectabel tuning step size it is easy to cover the whole band, and switch to the smaller step size for smooth fine tuning.  There are virtually no PLL lockup clicks when tuning in the smaller step size. The only time I heard any was when I made large frequency changes, then a quck click or two when the software switched to a different PLL divider setting. The RIT function works well, and since there is no limit to how far you can tune off the transmit frequency, it acts like true split mode.
Posted by DuWayne at 10:28 PM No comments:

I have been working on the circuit board layout for the "Frog Sounds" transceiver, in a "SPAM" can.
Everything fits on a board that just slides inside the can, and will be soldered to the transceiver circuit board. Using the small OLED display along with the Adafruit SI5351 board made this much easier, as they both use I2C for control.  This simplifies the hardware design and makes circuit board layout much simpler.  I was able to find Arduino code for a very simple CW keyer, and added the few required pins and provisions for a keying transistor to the hardware.
The transceiver uses a SA612 in a Direct Conversion receiver, and takes the 612 oscillator output to drive the transmitter.  Since the SI5351 puts out a square wave, I added low-pass filters to the output of the two clock signals I am using. Using Elsie I modeled the filters, and played around with values  so I could use components I had on hand.  Also added provision for attenuators to bring the signals down to the 200-300 mv. that the SA612 wants, also just used values I had on hand . 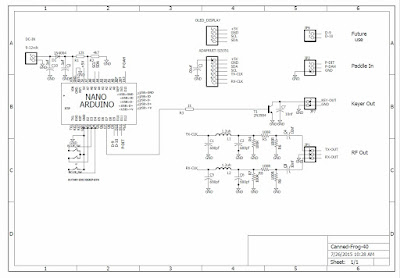 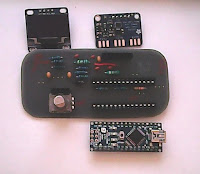 Everything fit on the board quite easily, except I had to stack the SI5351 board over the Arduino Nano board.  Using a cut down low-profile 40 pin socket, and trimming the pins on the Nano I was just able to get the clearance I needed.   If I wanted to solder the Nano directly to the board, this would not be a problem.
I put right angled pins on the back of the board to allow for easy connections to the transceiver board. 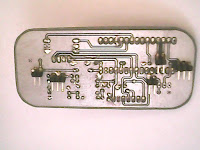 I was able to use  the software I had previously written for a simple VFO, with very little changes.  Since this is a CW transceiver, I limited the tuning rate to either 50 Hz. or 1 Khz.   I am generating  separate Receiver and Transmit VFO signals, so the RIT function is really  SPLIT frequency.  It just starts at the Transmit frequency when switched on. 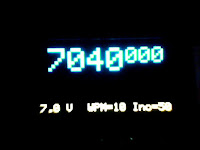 The OLED display is actually a monochrome display, with two different colored areas. I decided to use the larger blue area for frequency display, and the smaller yellow area for a status line. 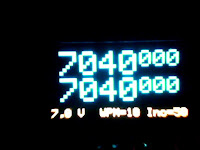 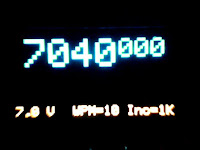 Control is very simple, a short push on the encoder button toggles RIT on or off.  A long push (1 second) toggles the step size between 50 Hz. and I Khz.  After step size change RIT is turned off.


The only other function is changing the Keyer speed, this is done by pushing in the encoder button and turning the encoder.  If you need a TUNE  for an antenna tuner , setting the Keyer speed to 0 sets the Dit time to 5 seconds and the Dash time to 15 seconds.  This adds a couple of steps when 'tuning up', but simplifies the code a lot.

I also measure the supply voltage about every two minutes, and display this on the status line.  Other status line items are the Keyer speed and the step increment .


Now onto building a front end band-pass filter and making a few mods to the transceiver board. Then stuffing it all in the can.

I have been following Pete's (N6QW) LBS version 2 transceiver progress, and decided to put my BITX project on hold until he gets his finished.   I might just change over to some of his design instead of what I had been thinking of doing

A while ago I had purchased a small 40 Meter transceiver kit from e-bay.  This is a crystal controlled direct conversion transceiver. 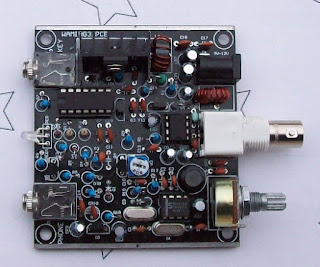 I was able to listen to the streaming of some of the speakers at FDIM and one of the things mentioned was converting this transceiver from crystal control to a VFO, thought I might as well give it a try myself.
I had done a VFO using an Adafruit SI5351 break out board, and decided this would work well for this project. Looking at the schematic of the board, it uses a SA612 as a crystal oscillator, and has a simple circuit to shift the frequency when going form transmit to receive.  I will use two of the clock outputs of the si5351 instead of shifting the frequency in software when changing from R to T.  This will also make it easier to implement RIT or Split operation.
Looking around for some Arduino CW keyer code.  I think I might be able to use some of the add on code developed for the TenTec Rebel.
I bread boarded a quick Arduino, SI5351, OLED display to see how it would work.  Most of the code from my earlier VFO ported over to use the new display with very little effort. 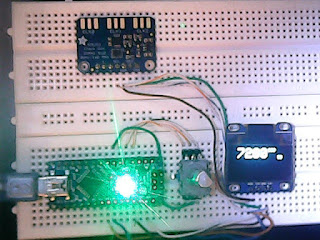 Looking at the size of the board, it looks like the ideal project to stick in a" SPAM" can.  Actually a " ARMOUR TREAT" can, it is much sturdier steel than the aluminum "SPAM" can. Just started laying out a circuit board for the VFO front panel, and working on adding to the software. 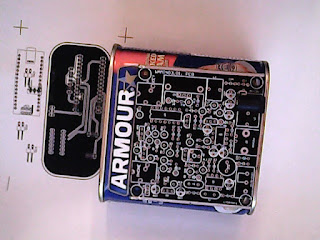 Will keep you informed.