Starting on a Tiny Spectrum Analyzer

I have been playing with building a simple spectrum analyzer for a couple years now.  I have tried several different versions, and have ran into similar problems with all of them.  For what I want I need several different resolution bandwidth settings. For more than two band-widths  the overall complexity becomes greatly increased. I have tried several different approaches, but have not been happy with anything I tried.  I had joined the Homebrew Test Equipment group on Groups.io ( https://groups.io/g/HBTE) , when it started.  Recently there has been a series of posts on a Tiny SA that has most of the features I would like to have.  It has a interface to a PC application for control and display.  I plan on adding a TFT dispalay to make it a stand alone instrument.  I have several STM-32 'Blue Pill' modules that I purchased a year ago. I think one of them should work well for this project.

This SA uses a pair of inexpensive SI4432 wireless ISM transceiver modules.  For use in a SA the important features of the SI4432 transceier is a frequency range of 240 to 940 MHz. at up to 20dBm output, variable receive bandwidth using DSP technology, and a Receive Signal Strenth Indicator signal with  .5 dBm. resolution down to about - 120 dBm. Complete modules with all the support components needed are available for less than $5 through the normal sources.

There are two different filters in the SA that I needed to design for a circuit board.  The first is the input low pass filter.  I decided a range of up to about 200 MHz. should be more than adequate for what I need.  My favorite design tool for filters is Elsie, with it  I can quickly design various types of filters, and tune the circuit to use standard value components.

For the low pass I decided on a 7th. order capacitor input filter. Playing with the program and values I have on hand, I came up with this circuit.

This should give a frequency response similar to this, depending on the actual components used. 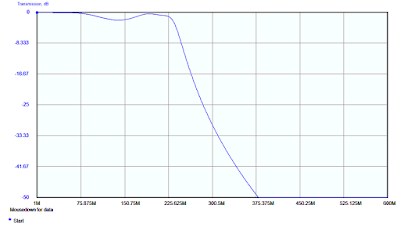 I had some circuit boards made by one of the Chinese board houses and, built and tested the LPF.  I used some SMD capacitors I had on hand from an assortment I purchsed a while ago.  Using a online calculor I designed and wound some air core inductors that are close to the values needed. (http://www.circuits.dk/calculator_single_layer_aircore.htm )
I used some 24 guage silver plated wire wound around a 3mm. screw as a form.  Four turns for the first inductor and five turns for the other two. 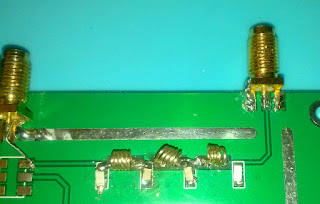 Connecting the circuit to the NanoVNA using one temporary SMA connector, and with a little reforming of the coils I was able to come up with  a filter with the following response. 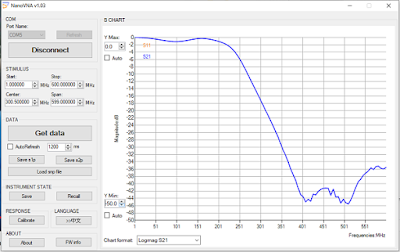 I had to settle for a little bit lower cutoff frequency than the original design to reduce the passband ripple but will be fine for the frequency range I want.  It also gives me the option of using a 315 MHz. first IF frequency if I want to try instead of the 432 MHz. in the original Tiny SA.
The next filter I need to build and test is the first  IF bandpass filter,
This will use a pair of  432 MHz. SAW filters.