When I first did the SNA Jr, I used my existing Antenna Analyzer software.  After playing with the Chinese SNA, I decided to do a rewrite of the  SNA Jr software to incorporate some of its features.  The major change was to add a settings screen, where I can set the start, stop frequencies, step size, and change modes. Since I added this I removed the PC interface.
The original sweep mode gave a relative reading, showing the  difference between the output of the SNA and the input from the device under test.  This has the advantage of directly showing the gain or loss of the DUT. 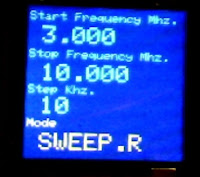 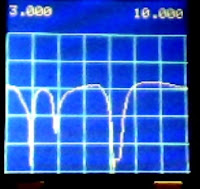 I decided to add an additional sweep mode which normalized the  data before it is displayed, this  makes it easier to measure filter bandwidth. 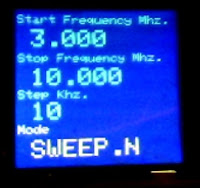 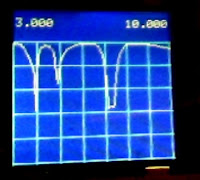 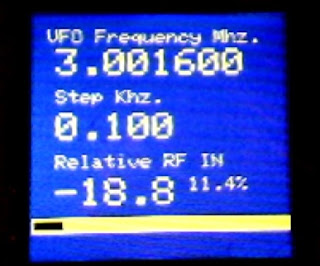 One thing I liked about the  Chinese SNA software was the VFO  (signal generator) mode with its RF voltmeter.  I added a similar mode to the SNA Jr with the voltmeter shown as both a bar  and numerical values.  Voltmeter values are still relative to the output of the DDS and shown as a db value and percentage of full scale.


Navigation is the same as in earlier the earlier version.  a long press switches between display and settings screen.  When on sweep screen, a short press starts a new sweep, holding the button while in a sweep goes to a screen to adjust levels.  Using the encoder scrolls through the sweep.
In settings mode a short press moves from one setting action to another, rotating the encoder changes selected setting. In VFO mode the rotary encoder changes the frequency by the step size.  A short press on the button toggles through different step sizes.

In the process of re-doing the circuit board layout to add a MMIC amplifier and attenuator to boost output and reduce loading by the DUT.  Also shifting some parts around to give a little more room so I can go to a slightly larger 160x128 display instead of the 128x128 I am presently using.
I will post the software and board layout when finished.  If anyone is working on building one, drop me a e-mail at duwayne@kv4qb.us and I can send you the software update.

After I got the hardware working with the pickup coil to use the SNA Jr. as a Dip Meter, I decided to add a DIP function to the software.  It does a sweep from 1 Mhz. to 50 Mhz. with 50 KHz steps, and looks for the deepest dip in the signal from the RLB.  After that sweep it sets the  range  to 1 MHz.  below and above the dip frequency and then  does a normalized sweep of that frequency range.  Much faster than sweeping through in several ranges.


After the last local QRP club meeting I was asked about the possibility of making kits available.  Still trying to decide if I want to go this route, or just make the design for boards and software available.  If anyone would be interested in a kit of this project drop me a e-mail at duwayne@kv4qb.us   Depending on the response I will decide which way I will go.

After looking at documentation for several versions of the BITX and others based on the original design, I decided to use the circuit of the BITX version 3b.  First board I started with was the
Audio /Balanced Modular.  I am using 'Muppet' style layout for the circuit boards, using double sided circuit board material.  This should give a nearly solid shield between stages. 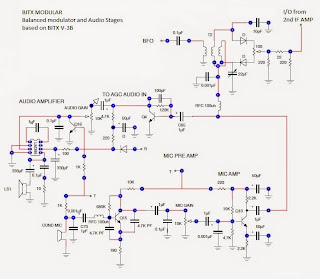 Most of the 'Muppet' boards I have seen use Express PC software to do the layout, but since I am more familiar with Eagle cad I went with that.   Only drawback was that I had to manually layout the ground pads.


After playing with the layout for a while I realized this will be a fairly crowded board, and even had to stretch it out a little to get everything to fit.  I did the layout as if I were going to use 1206 size surface mount components, and then placed a .1" square over each pad.  This will give me the option of using 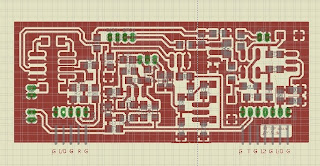 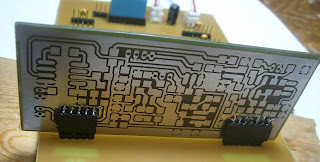 either leaded or SMT components if I desire..


After etching the board I installed the connectors and checked how well it fit on the back-plane.
The board fits nice and comes down to the top of the back-plane, hopefully this will give adequate shielding between stages.


Not to start stuffing and testing the board.
Posted by DuWayne at 11:29 AM 2 comments:

One of the functions available in the software for the Chinese SNA is the ability to measure SWR using a Return Loss Bridge.  When I was laying out the attenuator boards I had room to include a RLB. 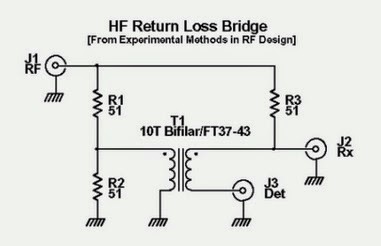 The layout uses edge mount  SMA connectors and surface mount resistors.  I allowed space for 2 parallel resistors to get the correct value if you need.  The plan for the RLB I used had 51 ohm resistors.  You can get 51.5 ohm by using a 47 ohm  and 56 ohm in parallel.   I had some 100 ohm resistors so used 2 of them in parallel to get 50 ohms.


I had just put up a new multi-band fan dipole, thought that would be a good test of the RLB and software.  I used my FoxDelta antenna analyzer to align the dipole. Doing a full scan from 1-40 Mhz., I got the following SWR Plot.
Using the SNA software in the SWR mode I got the following.  Since one display uses a log  scale  and the other linear for the vertical axis they look a little different, but after checking the values they are within a couple percent of each other. 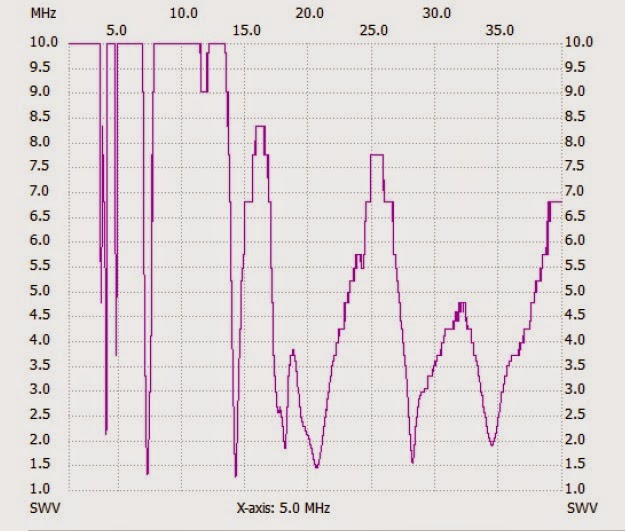 Just for the heck of it I hooked the RLB and antenna to the SNA Jr. and came up with this as a result.
Since I do not normalize the data on the SNA Jr. I had to manually compute the normalized values and use a Return Loss- SWR table to find the SWR at selected frequencies.  The values were also within 10% of those on the FoxDelta Analyzer.  Looks like the SNA Jr. with the RLB would be useable as a portable instrument for tuning antennas.

First thing I had to do after I received the Chinese SNA was its internal calibration.

To calibrate the system you will need an in-line attenuator, 6db. if calibrating linear or 40db. for log.  Using Eagle cad software I did a quick layout for a pi-attenuator.  Since the layout for the attenuator was so small I had room to put 7 attenuators on the  blank along with a Return Loss Bridge.  I have a fairly large selection of 1206 size resistors, but still need to parallel some to get the correct values for the different attenuators.  I did the layout to allow space for 4 resistors for the shunt resistance , and 3 for the series resistance.   After etching a set of boards, I computed the required values using the pi-attenuator calculator at
http://chemandy.com/calculators/matching-pi-attenuator-calculator.htm

I built up the required 40db. attenuator and a couple of other values. Looking at the software, there is a function to measure impedance of the device under test.  Using one of attenuator boards I fabricated the inline 50 ohm resistor required for this. I also built up the small Return Loss Bridge I had etched.


Calibration is very easy, go into the calibrate mode and follow the instructions on screen.  Place the 40db. attenuator between the input and output connector and run one sweep,  then remove the attenuator and connect the output directly to the input and run another sweep. After this is finished the calibration data is saved to a file.

I have the Eagle files and a PDF of the boards ready for toner transfer in the Drop box at
https://www.dropbox.com/sh/p4sqp2g8gu1gey4/AACrHZ8B3eqOm6-CRfIcDn4Fa?dl=0