The North Georgia QRP Club has been selling several small kits for the last few years.
One of them is a simple QRP SWR meter, but the small meters that were originally used are becoming hard to get and much more expensive then when the kit was first offered.
Several members of the group spoke to me about coming up with an updated replacement. 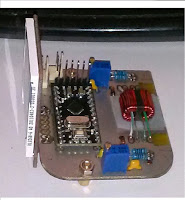 I had the Arduino and display circuit along with software I had used in the DL Power meter and the AD8307 power meter.  Using the board layout from these projects, I added a simple directional coupler and detectors built with a binocular core transformer.  With a slight change in parts placement it is possible to build in an Altoids tin.  Or with the display mounted vertically, it can be built in an aluminum project box. 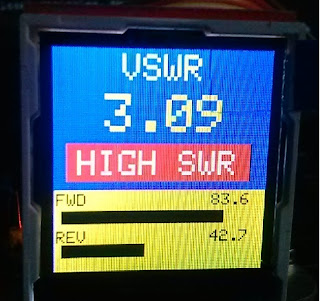 I split the display area with a digital display of the VSWR value in the top half, and bar graphs with digital display of Forward and Reverse values in the bottom. I later added a warning message that would pop up if the VSWR is greater than 3 to 1.   This picture shows the layout I decided to go with. For initial testing I used a couple of variable resistors to input DC values into the Arduino , so values shown are percent of full scale.


After building the directional coupler and detector circuit I did some playing with the software to get a close approximation of the actual power readings.  Everything seems to be working well down to around 2.5 watts.  Below that SWR value starts to loose accuracy.  I am waiting on some different diodes to see if I can get everything working below that level.  If that does not work, I am thinking of changing the detector  to add a little DC bias to the detector diodes.

Here is a quick video of the meter as my auto tuner matches to my multi band antenna.
Will update when I get the new diodes, or have to change the detector circuit.


I gave the first prototype to a club member that has better test equipment than I for test.
After a few minor changes to the software most of everything looks good, except for power values below about 2 watts.  It looks like this is because of the non linearity of the diodes. used.  Tried different types of diodes, but non linearity remains.
I decided that I would add a diode compensated amplifier to rectify this. I was able to find enough room on the board for the op-amp and associated components.  Initial testing looks like the power readings remain accurate down to about 100mW.  Some more testing is requited, but looks like the design is finalized, now to write documentation and see about getting everything ready to do a sample run of the kit.

After linking my two posts on the Cold Toner Transfer method to
https://groups.yahoo.com/neo/groups/Homebrew_PCBs
there has been much discussion about the danger of the chemicals involved.
Some of these mentioned the effects of day to day heavy exposure found in some industries.  The amount of chemicals used in this method is minute in comparison.  I still have about a third of the 4oz. bottle of mixture I made up after doing 3 single sided and and 3 double sided boards.


But .it is always advisable to take precautions when working with any chemical.  Even the most common such as dihydrogen monoxide can be dangerous under the right condition.
Years ago I made a simple air filter that I use when etching boards and soldering. It is very small and can be easily setup next to where-ever I am working.

I had a broken 12 v brushless fan from an old computer.  I cut out the bottom of a disposable food storage container and glued the fan to the bottom, making sure the fan would draw air in through the container.  I then glued a 9 v battery holder to the side of the fan and wired up a switch. 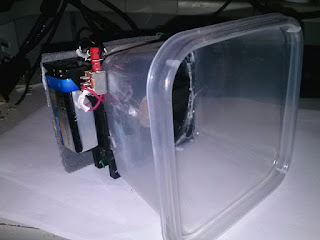 To the back of the fan I attached two of layers of zeolite air filter material, with a single ply of a two ply paper towel between them.  The filter is just held on by twisted wires through the normal mounting holes in the fan.


Very simple and very low cost.  Only thing I had to buy was the air filter material  about $2.00 ( replacement air filter from a kitty litter box).
I can move it around between the soldering station, etching tank and board prep.