I had a little time over Christmas weekend while everyone else was watching football to work on the TFT display for the uBITX.  I grabbed a 2.4" TFT display from another project and connected it to the Nano I am using as a test bed.  Just to be sure about the logic levels the display wanted I fed the control lines through a voltage divider made up of a 4K7 and 10K resistors.  This display gave me a much larger area to work with, and I could add some of the features that several other people suggested.  One of them was the display of the A: and B: VFO frequencies.   I decided to display the active VFO frequency in a larger font, with the alternate in a smaller font and a different color. 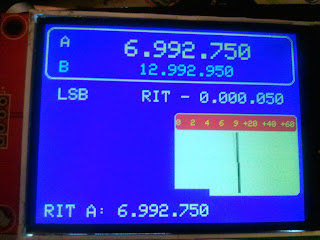 Another suggestion I uses was, when the RIT function was active, I displayed the offset from the transmit frequency.  I also changed the RIT tuning steps to 50 Hz. instead of 100.  I still have several other settings I need to display on the screen, but it is starting to take shape.


One other thing I wanted to do was add was an analog meter.  Mainly to use as a s-meter, but possibly as a power meter that will switch between modes on receive or transmit.  I looked at and tried the code from several versions I found, but they were fairly large in code size and required quite a bit of processing to compute the needle movement.  I decided I wanted top try something a little simpler.  Instead of using sin and cos functions to compute the angular position of the needle, I would treat  everything as a straight line value.  This lets me just draw a line from a pivot point for the needle to some point near the top of the meter face.  The line length would vary, but the effect would look close enough to an actual meter.  This resulted in two very simple functions, one to draw the meter itself and the other to plot the needle.  To move the needle, first it is drawn in the face color of the meter to erase the old value and then redrawn in the desired needle color.
The function to draw the meter is very simple

Next I will see about building something to get a signal from the uBITX to display.  I might start with a simple voltage doubler off the top of the volume control just to see how well it works.  Later I will probably tap into the IF chain to get an actual S-Meter .  Also thinking about adding a pickup off the antenna lead to measure power output, I can probably use the PTT signal to allow switching between meter readings from receive to transmit. 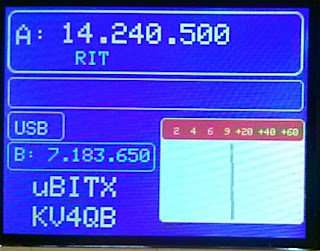 After playing around with several different versions of the display screen, I have come up with something I like.  Following a couple of suggestions from N6QW, I now show options available in Cyan and any active settings in Yellow.  On the screen you can see the second VFO frequency, and that RIT is optional.

Below the frequency read out, I have an area to display the command prompts from the uBITX, such as band change, VFO selection, RIT on/off. 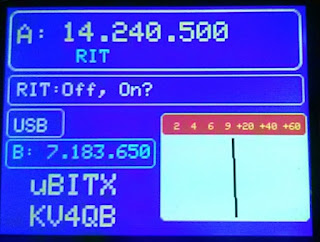 When RIT is turned on the offset from transmit frequency is displayed. I did make a change to the original code to change in 50 Hz. steps instead of 100 Hz. 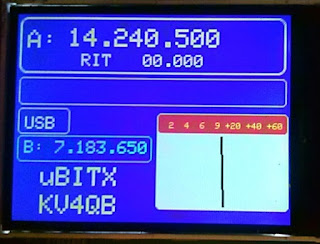 Finally I added a transmit indicator, and also checked the CW keying line and changed the mode display while a keying is present. 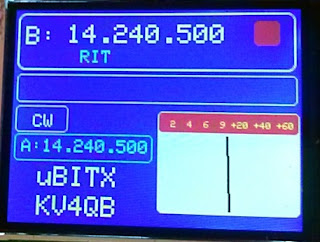 I am happy with the way the display looks, now to put everything in a box and see how it works.  I think I will re-write the code I have for the BITX40 and use one of the VFO/BFO boards I designed.  With that I have more Analog input pins available and should be able to implement power and SWR readings on the screen.


UPDATE 1/29/18
I have received several questions about the display I used on my uBIX.  The ones that I am most interested in are the ones that use a  ILI9340 or ILI9341 controller.   They are available in 2.4" or 2.8 " models.  I have found the response to be very fast using the standard SPI interface. 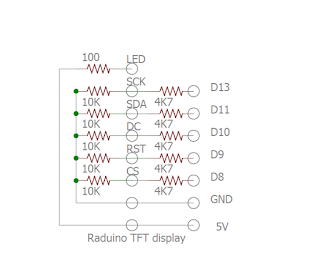 The main issue with them is that they usually require 3.3 volt logic levels instead of the 5 volt from Arduino, I have found a simple voltage divider does well in this application.  I usually power the LED pin through a 100 ohm resistor to 5V.  If a PWM pin was available, I would add backlight intensity control instead.  Software changes in the main sketch  ubitx_20 were fairly simple, and then I replaced the ubitx_ui  file with a modified ubitx_tft_ui file.  Changes to the ubitx_20 file are made in the declarations

/*
Comment out the original display driver  and replace with the Adafruit drivers
#include <LiquidCrystal.h>
LiquidCrystal lcd(8,9,10,11,12,13);
/*

// WE ARE GOING TO USE A TFT DISPLAY

With the updated ubitx_tft_ui code I tried to keep the code in the other files as unchanged as possible.  Except for the display, nothing else has been changed.

Here is a link to my modified uBITX sketch to support a TFT display instead of the normal 2 line LCD display.  Hardware change  is a small board with the voltage dividers that has a connector for the TFT display.  Only the first 8 pins are used.  Then there is a short cable that plugs in where the existing display plugs in on the Raduino board.

I had not realized that Santa traded in his Sleigh for a yellow cargo van, but he must have.  After seeing that the new uBitx was available for sale last Saturday, I thought about ordering it.  Then about 2 AM Sunday morning I couldn't resist much more and pushed the button at Paypal. 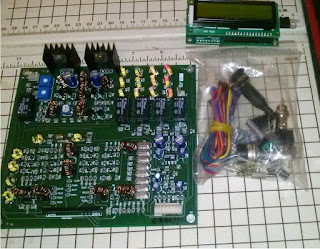 Just sitting around Thursday afternoon when the door bell rang, and there disguised as a DHL deliver driver was Santa.  I couldn't wait to see what the new toy looked like.  So after letting Santa get on his way to his next delivery, I tore into the box.  Inside the sturdy cardboard box was a plastic box with a couple of bubble wrapped boards, and a bag of parts. The uBitx board and Raduino are each wrapped in bubble wrap, and I could not see any shipping damage on either one.

I plan on replacing the 2 x 16 LCD display with a small TFT display, so I took a look at the wiring diagram of the display connector.  I checked the pins and they contain all pins to use hardware SPI on the Arduino to drive a TFT display.  I wired up a 1.8" display I had from other projects, and could not get it working with the pin combination I choose.  Playing around with some other wiring combinations, I was able to get it working.  Still wondering about that, because I have always been able to map anything but 11 and 13 to anything I wanted to use.  I realized that pin 12 is also used by the hardware SPI, and after changing to pin 10 everything worked as expected.  First thing I had to do was disable the LCD driver software and include the Adafruit libraries for the ST7735 and the graphics routines.  After that I replaced the LCD display routines with ones written for TFT display.  Luckily the uBITX routines map everything related to the display to a couple of simple functions.  It took very little to change these over to the TFT display.

The only problem I found was that with the 1.8" display I only had a x resolution of 160 pixels, and that limited me to using a small size font, without the text wrapping around to the next line.  But everything should work after I redesign a display screen layout to replace the default two line layout used in the stock uBitx.  The 1.8" display could be wired in directly, but for a 2.4" or 2.8" I will need to converted from 5 to 3.3 volts on the control lines.  I have found that simple voltage dividers work well for this, as the data flow is only one way.  At last something to keep me busy for the holidays 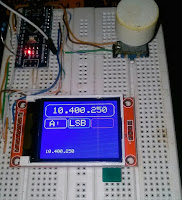 UPDATE 12/20/17
To make things a little easier to work with on converting the uBITX display to a TFT display, I wired up a Nano, display, encoder, and a couple other parts on a wireless breadboard.  This will allow me to take everything along when I go to spend the holidays with relatives.  So far it has been fairly easy to come up with a screen layout that fits well on the 1.8" display.  I am trying to limit any code changes to the ubitx_ui module, and mainly to the updateDisplay() function.  This should make it possible to easily switch back to the LCD by just loading in  a different version of  the ubitx_ui module, or possibly use  of #ifdef depending on how complicated the whole thing turns out.
With the limited size on the 1.8" display I am trying to keep everything as simple as possible.  It looks like I will probably have to switch toa separate screen display when I switch to setup mode.  When I move to a 2.4" or 2.8" with higher resolution, I will have room for information to be displayed at one time, and may be able to add a pop-up sub menu. 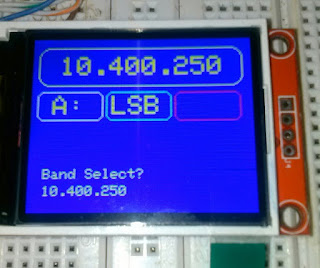 As of now I have the FREQUENCY, VFO, and MODE display finished.  Just now trying to add the RIT status display to the empty red box on the right of the screen.  Also plan on having the command prompts from pushbutton work as a pop-up item. Don't know how much I will get done before I have to pack it up and go visit relatives, but will keep you informed.
Posted by DuWayne at 2:19 PM 4 comments: