My SPECAN 2nd IF Amplifier 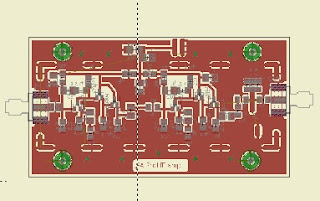 I did a circuit board layout for the 2nd IF amplifier and quickly etched a board.  Everything is surface mount on the top of the board with the bottom of the board kept solid for shielding.  Since I plan on shielding all the RF circuitry, I added solder pad areas to the top of the board to make it easier to solder, and also help with the alignment of the shield pieces.  My favorite material for making shields is .020" double sided circuit board.  It is easy to cut with a scissors or paper cutter, nice and stiff and easier to solder than copper flashing.  Everything except  the power connections and some filter capacitors are inside the shielded box.  The circuit is the same as Farhan's except I added  some  added capacitors to the DC power line both inside and outside the shielded box.  I also used a variable capacitor to the output filter, but added pads for additional capacitors if they are needed. 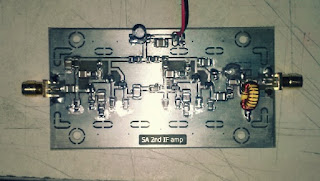 Since my eyeballs and fingers do not seem to work as well as they used to do, I stuck with 1206 size components but tried sot23 size transistors for the first time.  Unfortunately I only had the correct value for several resistors in 805 size, so I had to use them.  Since they were connecting to ground on one end I did not have to change the layout.  Actually after I got the hang of using paste solder and a hot air gun, it is probably easier and faster than soldering through hole components.  After it was done I hooked it up to the Chinese SNA to adjust the output filter.  The 60 pf capacitor I used tuned down to 12Mhz. so I did not need to add any capacitance. 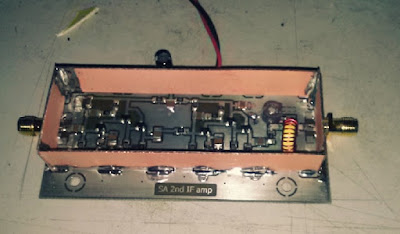 After everything was adjusted, I soldered the shield sides on the module.  I will add the top when I get ready to put everything in a box.  Now I am in the process of laying out the relay switched band-pass filters, that is turning out to be more than a little interesting project.  Will keep you informed.

Posted by DuWayne at 9:43 PM No comments:

I had a bit of a delay in getting the Canned Frog finished when my feline helper decided that the little plastic bags of parts for this and some other projects would make great Kitty Toys.  For several days I kept finding electronics parts spread throughout several rooms, and am still looking for several parts.  After finishing the transceiver board it was time to mount the VFO board and see about putting it in the can. 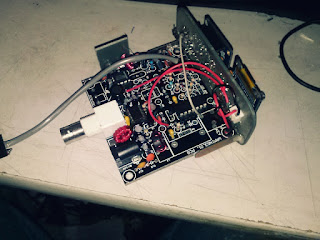 One of the biggest problems I have had in the past was how to label the panels. The best luck I have had was with press on lettering, but that limits what you can do and is a pain to get straight.  I thought I would see if the same toner transfer method I used for the boards would work for lettering panels.  I  cut and drilled a front panel from some more .020" circuit board material.  I cut out most of the bottom of the can so I could also make a rear panel from the same material.  Gave them a coat of Gray primer and let dry. 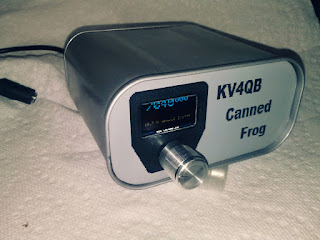 Using  MS-Paint I did up a set of panels and printed them in reverse on the same Hamermill Glossy Color Laser paper  I use for making circuit boards.  A half a dozen passes through the laminator, and a quick soak and the panels came out better than I had hoped.  The lettering looks like it is melted right into the paint.   A couple of heavy coats of Grey Hammer Tone paint on the can and then put it all together 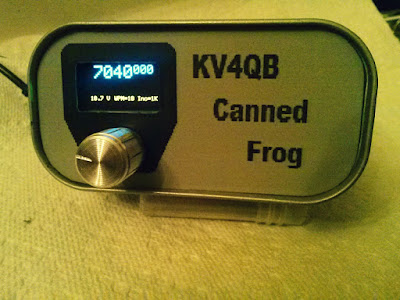 One of the Kitty Toy parts I couldn't find was the final transistor for the transceiver, so I stuck in the closest I had on hand.  Power output was a little low, but I will not worry about that.  The receiver works well except that the audio is fine for phones, but not enough for an un-amplified speaker.

The project accomplished what I wanted.  A small dual output VFO with display that will be the basis for another transceiver some time in the future.