I had been planning on doing a update on the CNC Engraver purchased to use as a PCB mill, but a couple things have gotten in the way.  First is the series articles I am writing for QQ, the designing, building, and testing, along with the writing is taking quite a bit of time.  Second reason was that I was clumsy. I had the unit along with power supply and cables all wrapped up and out of the way, I thought.  Then I was moving something else and knocked the power supply off the bench.  Of course it was wrapped with the USB cable, so when it fell it tore the USB connector off the controller board.  I tried to repair the board, but too many of the traces wore gone.  I had to order a replacement board, which has now brought the price up to what it would have been if not on sale when I got it.  While I was waiting for the replacement I designed and 3D printed several things to prevent this from happening again.  I made a cover for the circuit board, and some brackets to hold the power brick in place.  Along with the new controller board, I also ordered a Panel mount USB to mini USB cable.  I printed a bracket for it and some cable management clips that fit in the 2020 aluminum extrusion that makes up the frame of the engraver.  After everything arrived, and I finished printing the parts, everything looks really nice and secure mounted on the frame. 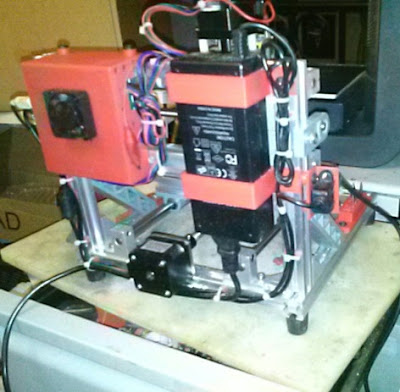 The first picture is of the back with the cover for the circuit board, including a cooling fan for the stepper drivers. 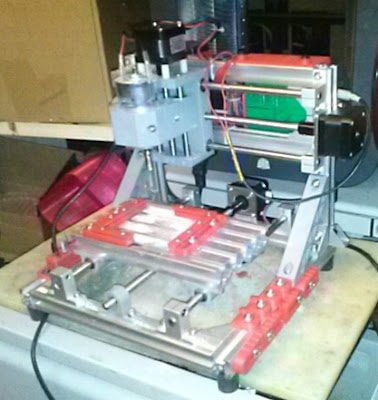 A set of brackets to hold the power brick and the bracket for the panel mount USB connector.


Along with the the repair and modification of the engraver itself, I have been spending quite a bit of time trying several different CNC  software packages.  And breaking quite a few engraver bits along the way.  To make things more interesting, I also changed my PCB design software.  I had been using the free version of Eagle, but the latest version reduces the size of board you can produce.  I looked around and found Sprint Layout, it is not free but only costs around $50.  I tried the demo version before I purchased, and found it to be one of the easiest to learn of all the different packages I had tried.  It allows you to generate Gerber files for sending to board houses, if I want to have boards made.  I can also print normal or mirrored images of the copper layer for making my own boards by 'toner transfer'.  One other thing I really like, is that I can make a complete assembly such as a bidirectional amplifier or mixer stage a single component that can be dropped onto a new board layout.  I can see where this could make several projects I am working on much easier to lay out. 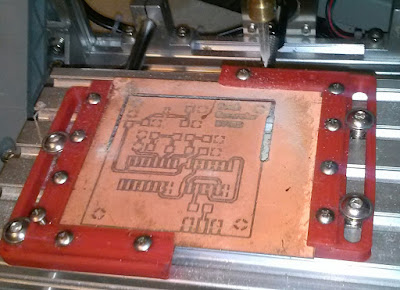 With all that I finally managed to route a complete circuit board.  I think I could do a much nicer job using 'toner transfer' , but it is a start.  I will play around some more tweaking settings in the various software packages I need to use to do the entire process.  One thing I did was to make a drill file for a board I had etched previously, and it did a nice job of drilling all the holes.  I may end up routing the boards for larger less crowded projects and etching the board, using toner transfer for more dense projects. Then just use the engraver for drilling all the holes and trimming the board. That has always been the most time consuming part of making fairly complicated boards with through hole components.  And a real pain to get the alignment correct on double row header connectors.  Well still have a few engraving bits left so will have to see what I decide on doing.

12/6/17
I bought a 3 lb. box of scrap pcb  material on eBay to use to play with the engraver as a pcb mill.  Was pleasantly surprised that most of the material was around 4"x6" double sided and in thicknesses from about .020" to .063".  A better deal than I had buying specific sizes in the past.
With that I spent some time playing with the software packages I need to design and mill the boards.  First, since I switched from
Eagle to |Sprint Layout, I had to play with some of the settings  to get the correct clearance around traces and pads.  Milling the boards seem to make that dimension a little more critical than when I etch the boards.  After getting those settings adjusted and exporting some Gerber files, next I had to work on some settings and sequence of steps I use in FlatCAM to generate the g-Code for the engraver.  Finally I built and installed a Z-axis zero probe to help adjust the Z height of the router bits in relation to the top of the pcb material.  With these settings modified, I decided to try a couple different boards.  The first was converting the LC380 amplifier board from the simpleceiver to Sprint Layout format.  This went quite well after just a little playing with the software. After using FlatCam to generate the g-Code and then making the adjustments for X,Y and Z zero in the GRBLcontrol software I use to control the engraver I milled a board. 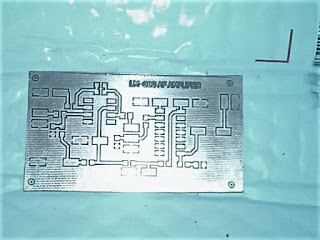 I was very happy with the results, everything was nice and clear.  It did not look like there were any problems with uneven milling due to the pcb material not being level.  I was worried about that, and had another auto-leveling program I could use if needed. But everything turned out great.  The next thing I wanted to try was a SMD board with size 805 components.  I took the AD8307 power meter circuit I had used on several projects, and changed  the components from 1206 to 805 size.  After generating the g-Code and milling the board I was more than pleased with the results. 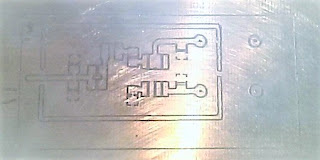 Everything was nice and sharp, no problems with under or over milling around the pads on the SOIC 8 AD8307 or any of the other components.  The only problem was getting a decent picture of the completed board.

I am now very pleased with the results I can get milling PC boards on the small engraver.  It is small enough and sits right next to my computer desk.  Now I can design, layout and mill a board with out having to even get up from the desk.