The New Toy is here

Well the new toy arrived today, and I have spent the last several hours just playing with it.  It came a fairly well packaged box within a box, with a layer of bubble wrap. I tried to get some pictures, but was having some problems with the camera, so going to use a couple from a post by Herb on the TinySA .IO group.  Overall packaging looks great with a custom printed box , and a molded holder for all the components inside.  This is much nicer than I have seen for most products of any type in this price range 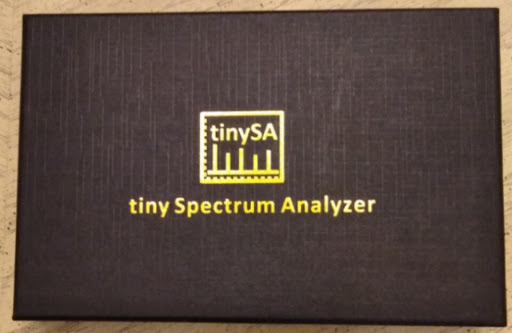 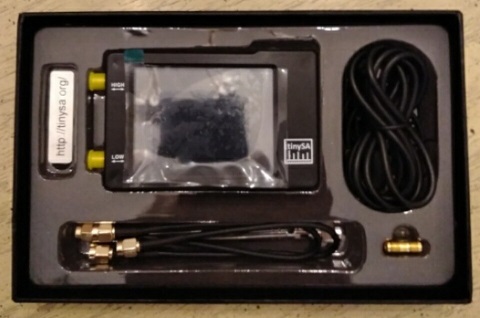 After charging the battery, I ran the Touch screen calibration and the self-test. This self-test has you connect the included SMA cable between the High and Low connector. It uses an internally generated signal for inital testing. Several values can be calibrated later through dedicated menu items. I was able to get a picture of the self-test screen part way through the process. 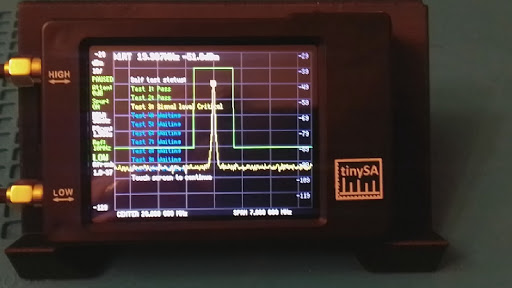 After the self test, I connected the TinySA to my computer, running the TinySA.exe program.  This allowed my to take screen captures of the display, instead of trying to get a steady picture with a hand-held camera.
First test was to use my SI5351 signal generator as the signal source.  Conecting everything up I made several screen captures at 10,30,100 Mhz., and one at 50 Mhz with the waterfall display turned on. 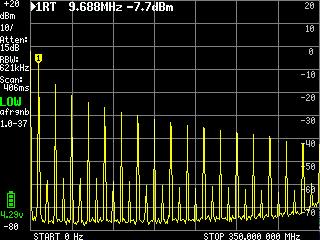 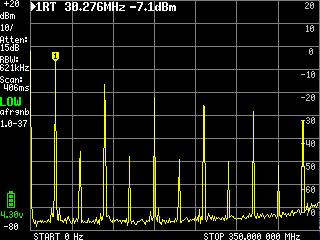 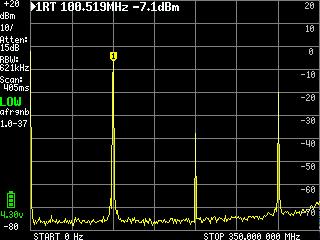 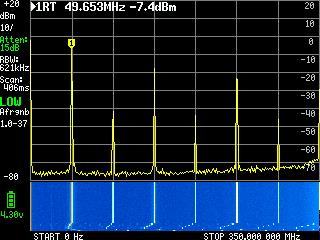 The output of the 5351 is a square wave, so you can see the high harmonic content of the signal.  With the odd harmonics are much stronger than the even.  Power level is just about what I measured with my home-brew AD8307 power meter.  Any differency in frequency readout are due to the fact that my signal generator is not calibrated, and the step size of the TinySA.  In the stand alone mode the maximum number of steps is only 296.
Well I guess that is enough for now, so I can get back to playing with the new toy.  Just with the little while I have played with the TinySA, I can say that I am impressed with it.  The UI is very nice, but it will take a while to become really familiar with the menu structure and all the settings available.
It does not have a tracking generator, but you can use the Low out put as a signal generator in the .1 to 350Mhz range.  When used in the SA mode this output is 433 MHz above the test frequency.  So with a 433 MHz signal source and a mixer it should not bee too difficult to make a tracking generator for the system.
Now to get back to playing.
0805 update
Just a quick update on what I  found when going through the menu options.  Since I had been looking at harmonics, under the Measure menu there is an option for Harmonics.  It allows you to enter the fundamental frequency, then it computes the start and stop frequencies to cover the fundamental and the first three harmonics.  After the sweep it marks and displays the fundamental frequency and amplitude, and the 3 harmonic values shown as dBc relative to the fundamental. 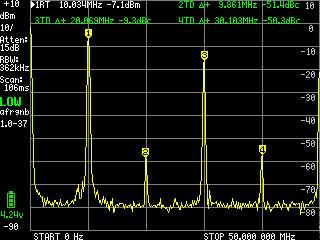 So. Back to playing and lets see what other things I can find.
Posted by DuWayne at 6:21 PM