Well it has been a while since I did an update post for the TinySA or anything else.  It has been a combination of some computer problems that I had to correct along with the associated data recovery.  I also made a mistake and bought a FireStick for my TV.  With all the streaing channels available it is WAY TOO EASY to spend a lot of time watching some of the older movies and TV shows.  I have also been doing a little bit of another type of Home Brewing.  Just finished up the 2nd. generation batch of UJSSM, and starting on the 3rd. generation.

So, lets get back to the TinySA.  There has been quite a bit of information by way of groups.io, and several YouTube channels with coverage of the unit.  Because of these the developer has released several updates to the firmware.  These have corrected some of the problems fund in the early versions, and some added features.  Because of these updates, I have been more impressed with the TinySA.

The one thing it is missing is a tracking generator. But, since I have a NanoVNA it was not an immediate issue.  I finally decided I would build a very simple from available eBay or other outlet modules. The most basic tracking generator is just a RF source at the first IF of the SA and a mixer. The RF from this source is mixed with the LO of the SA to give you a signal that tracks the sweep frequency of the SA.  I looked around at some of the PLL modules, and planned on doing something with an Arduino.  Then I found several versions of ADF4351 modules that were complete RF generators.  There were 3 versions that differed mainly  in the type of display and controls.  I went for one that has a full graphics display touch-screen controls, instead of the ones with text only display and push-buttons. 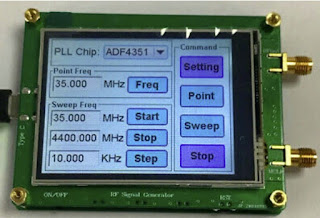 This is a self contained unit only needing 5 volts supplied through a USB connector.  Along with fixed frequency output, it also has a sweep function.  There is also a connector that brings out the 25  MHz reference used by the PLL.  With a frequency range of 35 MHz. to 4.4 GHz. it is quite a impressive for the $35-$50 they sell for depending on the supplier. The other versions are available for around $20 to $30. 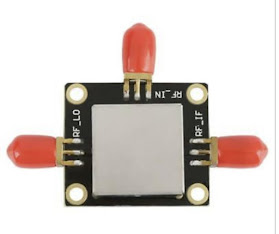 Along with this I needed a RF Mixer.  I found a small passive DBM module using an ADE25 for around $12.  They both use SMA connectors, so it should be easy to wire-up and test. Total of around $50 for the tracking generator with nearly zero development time sounds good.
I 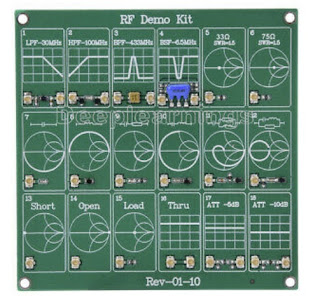 I had previously ordered a RF test board to use with the NanoVNA.  The filters included on this fixture should work well for checking the tracking generator.  Since this also comes with SMA connectors on the test cables everything should be realy easy to test.

Now the hard part of the whole project was waiting for the parts to come in.  With the whole Covid mess parts delivery times for anything from the Far-East have been greatly increased.  Most of these have gone from 1 to 2 weeks to 5 or 6.  Although I had ordered these parts over a 2 week period they all came in with 2 days of each other.

After powering the RF generator from a 5 volt USB power pack, I connected it to the Low input cnnector and set it for 100 MHz. output.  There is a slider control for setting the output level, so I set that for around 50%. 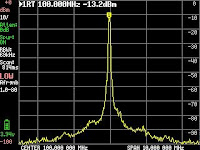 Looking at the signal it was on frequency, with what looks like some phase-noise. This would not be unusual for a PLL generated signal. Amplitude level is very usable, with this at 50% output, there should be plenty of drive for the ixer. 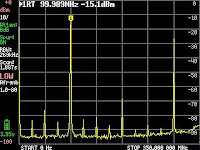 Looking at a wider sweep, you can see that the output is a square wave, with strong odd harmonics,  and there is a fairly high level of the 25MHz. reference signal showing up in the output wavefrm. 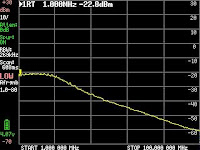 Now that I know I have output from the RF generator, it was time to connect everything up as a tracking generator.  I connected the output of the RF gen. to the LO connector on the Mixer, and the High output on the TinySA to the RF connector on the Mixer.  I connected the cables on the RF test board to the 30 MHz. Low pass filter. One of the cables went to the 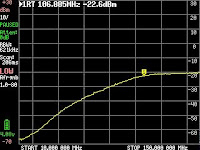 IF connector on the Mixer and the other to the LO input on the TinySA.  I set the TinySA for a 100 MHz. scan, and enabled the LO output in the expert config menu.  On the RF Generator, I set the output frequency 433.9 MHz., which looked like it gave the best results.  I was very happy with the response , so I connected the 100 MHz. high pass filter on the test board.  Setting the sweep range up to 150 MHz. I also saw a very nice looking waveform. 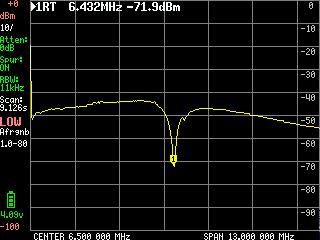 These looked very nice, but they were fairly wideband filter responses.  I wondered what a much narrower band filter would look like.  The test board has a 6.5 MHz. notch filter that would make a very nice test of a narrower bandwidth filter.
Connecting it up, and adjusting the sweep paramaters, I was very happy to see that a narrower bandwith filter response also looked very nice.   Since I have a NanoVNA, I will probably just use that for checking filters,  but it is nice to have an option if needed.
The TinySA has a High frequency input that does not have the filtering of the Low frequency input. This is much more likley show spurs and other unwanated signals.  I wondered if I could use the sweep fnction of the RF generator to provide a signal that could  be used for checking higher frequency filter networks.  For this I setup the test bard for its 433MHz bandpass filter.  I disconnected the RF Mixer, and connected the  PBF directly between the RF generator and the TinySA High connector.  I set the RF generator to sweep about 20 MHz on each side of the 433MHz .  I set the TinySA center frequency to 433MHz. and a span of 50MHz.  Because the RF generator sweep is not tracking the TinySA sweep, I turned on max hold in the display calc menu.  Then let everything run for a couple minutes. 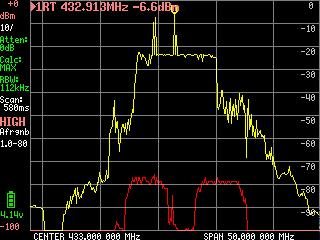 It isn't very pretty, but it did plot the response of the filter.  Since this looks like it is a SAW filter with no impedance matching, the respnse could be fairly accurate.  I have to connect to the NanoVNA and compare some time.
Another thing I had seen in a YouTube video was using a RF gen and mixer to extend the frequency range of an SA.  Since the Mixer mdule I have should be good to 2.5GHz. and the RF generator will go even higher, I want to see if I can look at the WIFI signals in the house.  I connected the RF generator output to the Mixer LO and the Mixer IF output to the TinySA Low input.  I connected the small whip antenna that came with the TinySA to the Mixer RF connector. The  2.4 Gig WIFI frequency range is around 2410 to 2480 MHz, so I set the TinySA for a sweep of 1 to 100 MHz.  I then set the RF generator to 2400MHz. fixed frequency.  I also set the TinySA display to max hold.  I played a short YouTube video on my computer to make sure I had WIFI activity from my computer to monitor.  After a couple minutes I saw the presence of the WIFI signal on the TinySA.  Checking the frequency, I can see it coresponds to the WIFI channel I have my network configured for. 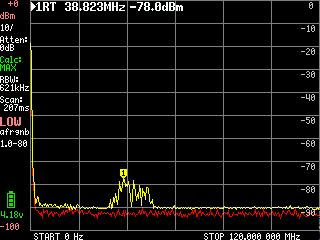 It looks like using the mixer and RF generator it is fairly easy to extend the range of the TinySA if needed. There is a fair amunt of attenuation through this passive DBM, so I might try using one of the small LNA modules to see if I can improve the sensitivity at these higher frequencies.
I am very happy with the results I have seen so far.  I will probably design and 3D print a little case for the RF generator, and possibly add some mounting for the mixer on the case.  This and some shorter cables would make it easier to use.  I had thought about making some connecting couplers, but after using it I think I like the versatility I get with just using connecting cables.
Update 12/04 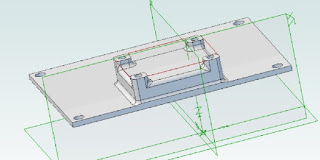 I designed and  3D printed a simple case for the RF generator, and added a raiser on the back to mount the Mixer.  It is high enough to allow easy connection of the SMA connectors. 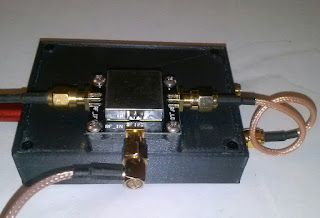 Here is a shot of it assembled and the cables connected for use as a tracking generator.  The cables I have are a little long, so I coiled the LO cable just to make it neater.

And finallly a picture of it connected to the TinySA, ready for use.   I cropped the picture, so you can't see the small coax cable that would go to the DUT.
It makes a nice small configuration when used as a tracking generator, or to expand the range of the TinySA.  Now I guess I will have to design a small box to house the units when not in use.
For best dynamic range I should probably put an attenuator in the LO line to provide the correct LO drive level.   I can put my step attenuator on the IF port so I can adjust the output level.  If needed I might make a Low Pass filter for the output.  Since I have a NanoVNA for filter alignment and testing this is mostly an experiment.  I think I will probably use it more to extend the frequency range of the tinySA
I have a couple other little add-ons for the TinySA that I hope to finish shortly.  That is depending on how long it takes for the parts to get here.
Posted by DuWayne at 5:51 PM