Normally I would start with the audio amplifier board, but in this case I will start with the microphone amplifier for two reasns. First it is the simpelest to build, and second almost all the other circuits in the transceiver are just a variation of the same common emitter amplifier. Values have been changed to provide different gains, or frequency response. For the RF stages. compnents have been added to provide impedance transformation to make it easier to connect to the next stage.  If you look, the bi-directional amplifiers in the IF stage are basically two common emitter amplifiers on top of each other. Switching  power to the desired amplifier changes the direction of signal flow. 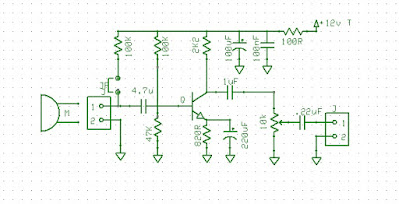 The schematic and values are directly from the LT Spice simulation by Pete, with the exception of an added 100K resistor that can be jumpered in if you need to power an electoret micrphone.  For a lot more informationon how the values are determained check this YouTube by Charlie  ZL2CTM on Common Emitter Amplifier design  If you have not already checked Charlie's YouTube channel you are missing out on a huge amunt of information.  He has built a variety of both hardware and software defined radios.  He goes into the the math required for the design in a lot more detail than I even want to think about.

I have tried many different construction methods over the year, and have found that time spent doing the inital layout, can save much more time and effort in the actual build.  I have tried 'Ugly' or 'Dead Bug' , I find that it quickly turns into something that is impossible to modify if necessry. At least for me, I have seen some fantastic builds that others have done. I perfer using a Perf-board for one off AF or RF circuits, and for almmost all Digital circuits.

I started just doing the layout with pencil and paper, but still ended up running out of room or needing to use a lot of jumpers.  A few years ago I started using PCB design software, and now use it no mattr what method of construction I will be doing.  There are two main types of PCB design software.  One ties the PCB layout directly to a schematic. This offers more assurance that the layout will be correct according to the schematic.  The disavantage is that if you want to make a change to a component or value on the layout you will have to go and make the change in the schematic first.  The other type is more of just a graphic design program that allows you to add or change components in the layout as you want.  This means that the entire correctness of the layout is up to you.

But depending on the software, this method has some major advantages. The software I usually use allows me to take part of an existing layout and save the entire section as a component in the library.  Most of the other programs I have tried allow you to make new components, but will not allow you to save a part of a layout as a component.

One of the design programs sometimes I use is ExpressPCB+.  It is free but tied to a single board house.  You do not have to option to export as a Gerber file that can be sent to any PCB house.  For those who make their own PCBs using the toner transfer or other metods can use the printed output of the program to make the transfer image. My favorite proram is Sprint Layout, not free but only around $50. It has all the options of ExpressPCB+, and the ability to generate Gerber files along with many other features.

First thing I do is design the board as if I was going to make a simple through hole PCB. I can easily move components around to fit the size board I want, simplify layout, and elminate as many corssing lines as possible.  I could generate the image to use for toner transfer and etch a board, use a cnc router to mill the board  If I set the grid size to be .1" (2.54mm) I can use it as the layout template for a perf-board build.   They will look something like this.

For RF and digital circuits it is often desired to have a large ground plane on the board.  In this case the software allows you to fill the board with a copper pour, and isolate the traces and component pads that are not connected to ground.  This can be either etched or isolation routed.  In this example I show the  ground trace just as reference, It is really through the copper pour that the grounds are connected.  On more complicated boards this can be a problem if component and trace layout isolate ground from one area of the board to another.  In this case jumpers may be necessary, or a double sided board with 'vias' to connect the ground sections together.

These two examples use through hole components, and for the hobbiest that  means a lot of drilling.  To make this simpler for the another method called 'MUPPET' has been developed.  this moves the copper traces from the bottom of the board  to the top.  Instead of pads around the through holes, a large solder pad is placed at the end of each component lead.  It is fairly easy to bend the component lead sso it can be soldered to the board.  Ground connections go directly to the copper . 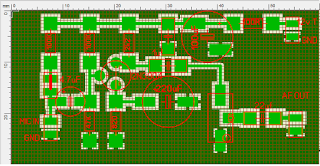 For those who do not want to take itme to etch boards, another method called the 'Manhatten Method' is very common.  It uses small pads made from copper clad circuit board gluded to a piece of bare copper PCB material.  These pads may be home made, or a commercial product called 'ME Pads' are available.The things you have to watch for is that any adjoing pads are properly jumpered, and that connected pads should be jumpered with insulated wire to prevent shorting to the  ground plane. This method has the advantage of being very quick and the template looks something like this.

Another common method used is to create 'islands' on the bare copper PCB material witha CNC router, or manually by using a tool such as a 'Plexiglass cutter' to scrape lines through the copper PCB material. The most important thing if done manyally is to make sure all the copper material is cleared away, and there is no connection between the islands.   This could also be etched if desired.   Again the traces are shown only for reference, the components are soldered directly to the PCB 'islands'.

From these simple examples, you can see that the same layout can be used as a template no matter which method you want to use.  There are several other methods using things like strip boards that are used by very successful builders . Look around on YouTube, and you can get more information on many of these methods.  Some of my earlier posts cover toner transfer PCBs and might be helpful.

So no matter what method you want to use for the project, my reccomendation is to play with the layout using whatever PCB design program you want and simplify the layout as much as possible before you heat up a soldering iron.

Now I have a useable template for a perf-board version, and a package of parts just arrived yesterday so I can get started on the mic amp.  Next post will look at how it is built and some simple ways to test it and the AF amplifier module that comes next.