After finishing the microphone amplifier and the AF amplifier modules, it is time to test them.  For the experienced builder with  scope and signal generator available it is no problem.  If you are new to building, and don't have these available, there is a very inexpensive option that may even work better.

I spent more than 25 years working as a field service technician.  During this I spent more time than I want to think of dragging scopes, and other pieces of test euipment around.  During the last years before I retired, I found several useful pieces of software that allowed you to use PC sound cards as scopes and or signal generators.  Although they were not suitable for calibrating the equipment I worked on.  They were more than adequate for trouble shooting, and verifying   basic system operation 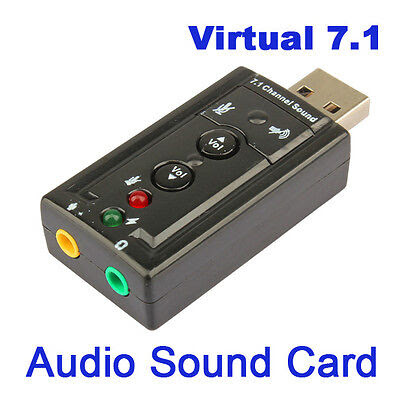 Although these worked better with actual sound cards, they also work quite well with the very inexpensive USB sound cards that are available simular to this one. 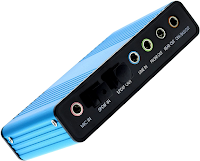 Other USB sound cards will give more options such as dual channel input, but are more expensive.

Only prblem I have found with the USB card is that sometimes there are higher frequency signals found because of traffic on the USB bus.  This has normally been  higher than the 5 KHz. I think of as the upper limit for frequency response in comunication equipment.

They only requite a simple interface to provide usable results. I have tried several, from basically just  DC blocking capacitors,to ones with internal amplification. 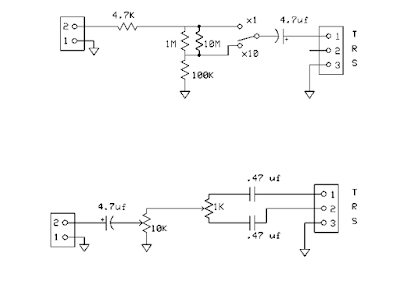 The one I use most of the time uses a simple X1, X10 voltage divider along with DC blcking capacitors on the output to the MIC input on the sound card.  If you use an internal sound card with a Line Input, you can build a two channel version of the interface.
If you use Line Input you can  elminate the DC blocking capacitor going into the sound card. It is there to remove the DC voltage out of the MIC input used to power Electoret microphones and provides protection for the sound card.  I like having some protection for the sound card from DC voltages in the circuit being tested.  Espically if you use this to test Tube circuits, with their higher voltages.  To add this place a pair of back to back diodes 1N4148 orsimilar across the input to the sound card to ground.
For the  Signal generator output, I capacitivly couple the sound card stereo channels to a 1K pot.  This couples the L and R channels , and lets you ballance the output levels so you can use this to generate a two tone audio signal for testing transmitter out settings. The combined output then goes to a Pot. for level adjustment and a DC blocking capacitor to the output connector. 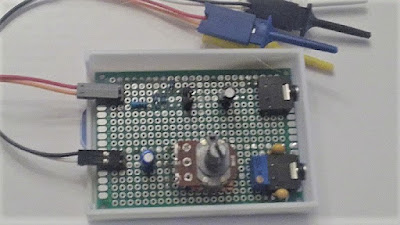 This is also built with perf board, and use right angle header pins as output connectors.  The header pins let me use JST jumpers to connect to modules being tested or to build simple fixtures for making testing easier.   Instead of a switch I use a 3 pin header and jumper to selecdt voltage level.  You could also replace the voltage divider with a 1 Meg. Pot. to make construction even easier.  I used some 3.5 mm. jacks for the signals going to the sound card.  You could elminate them and use a 3.5 mm stereo cable cut in half and wired directly to the circuit.

There are two different software packages under Windows 10 that I use.  One is Soundcard Oscilloscop    and the other is Visual Analyzer.

They have similar basic functions

2 Channel signal generator
Visual analyzer has additional functions among them a Voltmeter, Frequency Meter, with additional hardware a ZLRC meter.
Both free for non commercial use, a commercial license or donation available.
I am only going to use Soundcard Oscilloscope for this post.  After doing the install you get the main screen. 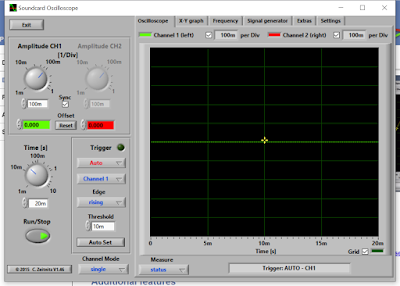 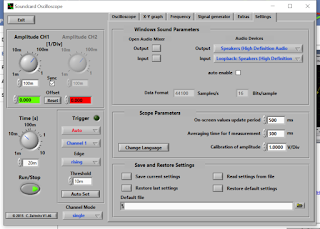 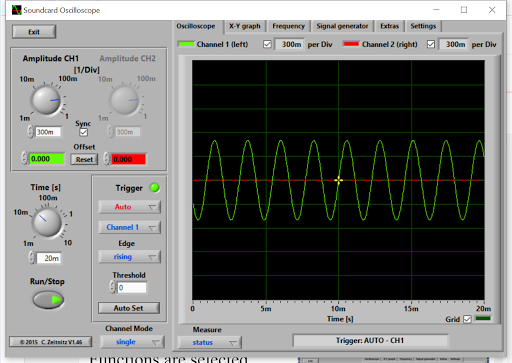 First function  to check out is the  Oscilloscope function selected by clicking on the first tab.  To the right you have controls for setting the voltage range per channel and the timebase for the sweep.  There are also options for setting trigger type , slope, and threshold. 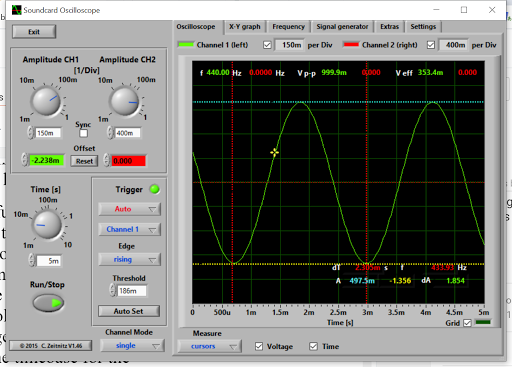 Just below th display area there is a button to set the type of measurement you can make.  You can set cursors for both amplitude and time. For both there is a display value for the reference cursor and the difference between it and the second. 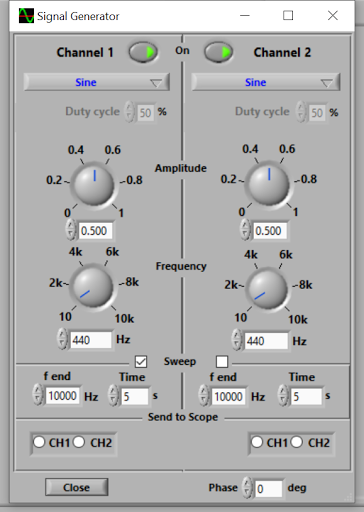 The next thing to look at is the
signal generator tab.  This allows you to select the type of signal generated, frequency and amplitude for each channel.  It also allows you to set up frequency sweeps that are very handy for checking frequency response of amplifiers. This can be brought out as a separate window to make it easier to use. 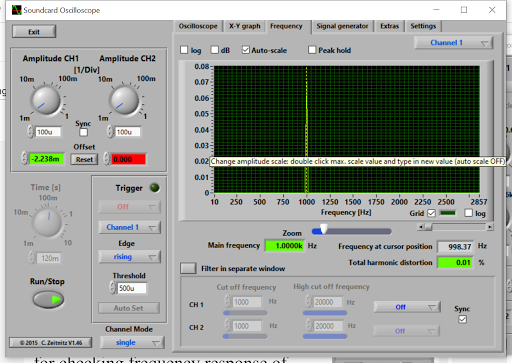 The last function I commonly use is the frequency display.  This uses a FFT to compute a spectrum display of the input signal in the frequency domain, instead of the time domain.  This is very useful for measuring the frequency response of a audio  amplifier or filter, when used with the signal generator.  You can place a cursor on a signal  to get the frequency of the signal. Along with the cursor you can use the zoom function and position to look at a signal in more detail. Unfortunatly there is no vertical cursor, so you have to turn on the grid and reference signal levels to a scale on the side. Some of the other useful options in this function is the ability to look at the levels in dB, and usea peak hold when sweeping to plot the frequency response of a amp or filter. 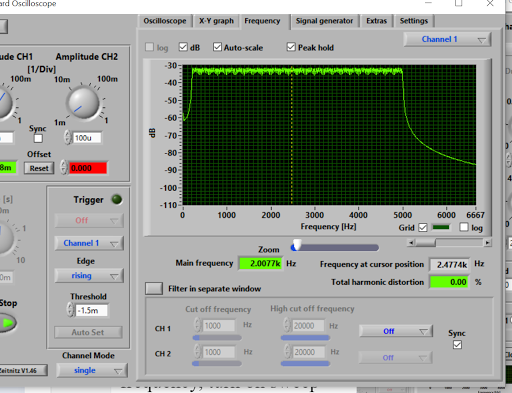 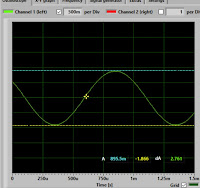 Now lets switch to the sound card input and output, and connect to the microphone amplifier.  After setting the signal to a 1KHz Sine wave and a level  just before the output started to distort. 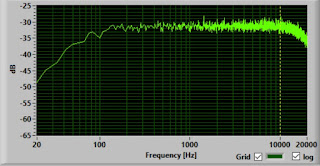 I switched to the frequency mode and set the signal generator to sweep from 20HZ. to 20KHz. With the display in dB and max hold, you can see the frequency response is flat from 100 Hz to over 10KHz. 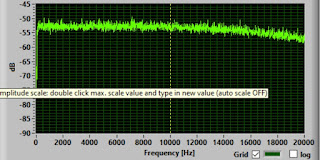 The log display makes it look noisier at the higher frequencies. But, if you look at the response you see that the noise level is fairly constant across the whole range. 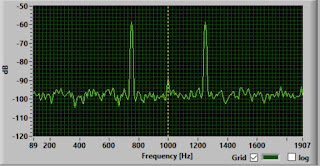 There is one alignment of the test fixture that should be made, that is to adjust the balance between the two channels.  This signal will be used later to do a two tone test for setting the microphone level.  A good Youtube video by W2AEW  Two-tone test of SSB transmitter output explains the test quite well.  The two frequencies should be non-harmonically related and adjust the balance for equal levels. I used 750 and 1250 Hz. and set the cursor at 1000Hz.  Then use the zoom control to spread the traces apart.  Then just adjust the balance pot for equal amplitude.  Make sure you have peak hold turned off while doing this. 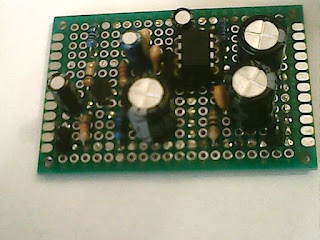 Testing the audio amplifier module is the same as the mic. amplifier.   Only thing different is that you need a load between 4 to 32 ohms on the output. The first stage of the audio amp. is nearly identical to the mic. amp., it is followed with a LM386 AF amp IC.   The volume control should be a audio taper pot, but I only had linear taper in my parts box.  You can approximate an audio taper by adding a resistor between the wiper and ground terminals on the pot.  You need to use a larger value pot. to compensate for the final parallel resistance.  Normally the added resistor value is around 20% of the pot. value. I ended up using a 20K pot and a 3K9 resistor. 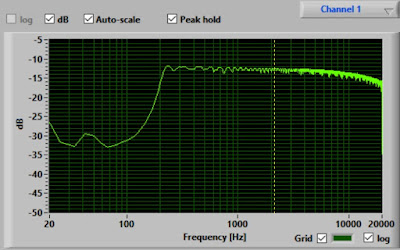 Setting things up the same as for the mic. amp., 1 KHz. sine wave set the input level and volume control to just below the point of distortion on the output signal. This is kind of tricky because of the gain of the LM386 is set quite high and you can get the output to distort very easily. I turned on the  sweep from 200 Hz. to 20 KHz. and let it run for a while with peak hold turned on. I got a linear response from 200 to just over 8 KHz. where it started to drop off a little. Overall the AF stage has quite a bit of gain, that can start to distort fairly quickly, but has a flat response over the frequency range of interest for communications equipment.  Gain on the LM386 can be reduced by decreasing the value of th capacitor between pins 1 and 8 of the IC, if desired. Thats it for testing audio amplifier stages.  AF filter response can be tested iin the same way.
Next I will work on the VFO-BFO oscillator, based on a SI5351 module and Arduino.  I have done several versions of these before, but will layout a simple version that can easily be built on the same style perf boards.  I plan on bringing pins out that will allow the module to be used for testing RF stages in the transceiver. Hopefully I can get this to work similar to the original SNA Jr. or Sweeperino from my earlier posts.  This should be very helpful for those  who do not have anything in the way of RF test equipment.