I have been working on several projects, most of them not related to electronics.  The main electronic related one has made me look back on some code I wrote 6 years ago when I first started learing C++  and the Arduino IDE.  Still wonder what I was thinking of, and how did I ever get anything to work.  Looking at some of the code made me think it was written in a write-only languge.  Almost as bad as looking at some of the things written in FORTH.

I had been following the Vienna Wireless Society makers group and their Simple SSB transceiver.  They finished that with around 10 units up and running. Many built by members that had no building expereience.  I had started to build a version of this, but they had mostly finished with the project when I started joining their Zoom meetings.  I had some ideas of how I would like to change this, and then other things came up that postponed  my doing this.  They just started a new project, to try to get more of their club members into home brewing (electronic kind not liquid kind).  This one is a Direct Conversion Receiver which should be easier for the first time builders.

I am going to try to follow along with their progress, and build each module as they are presented.  Probably make a few changes as they progress to reflect some things I already have on hand.  They have a Zoom meeting about every other week, to present info on the next stage in the project, keep up with build progress, and provide assistance as needed.

This is a fairly conventional DC Receiver. The interesting thing is that they plan on using a home made Diode Ring Double Mixer, instead of  a ADE-1, SBL-1. or an active mixer like the NE602. 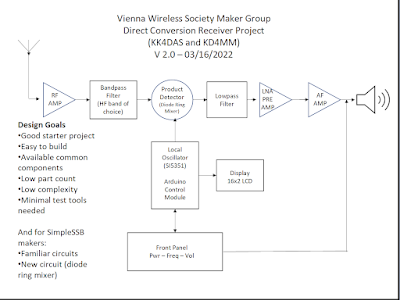 Here is the block diagram of the receiver, with each block being built as a separate module. Many of these blocks are similar or the same as used in their SSSB project. so there should be plenty support for the first timers available if needed.  They plan on using an Arduino and SI5351 as the VFO, but one of the members has already built an analog PTO that could be used instead. 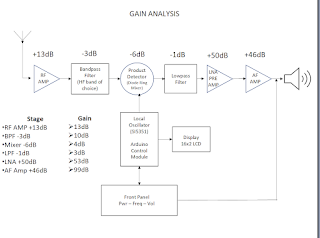 Their last Zoom meeting went over the block diagram. And, a gain distrabution diagram to define the gain or loss in each stage to get up to the required overall system gain. 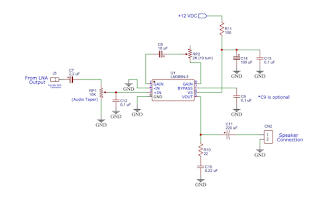 Then went into the first module to be built. This is a basic LM386 AF amplifier circuit taken directly from the LM386 datasheet.  Nearly the same as used in most  all simple receivers.  The only thing that is slightly different, is a variable resistor in series with the gain determining feed back capacitor. Since almost all of the overall gain is in the AF amplifier stage, this resistor allows you to set the final stage gain to prevent clipping on strong signals with the volume control all the way up.

Most of the modules will be built manhatten style using MePads, but any other type of construction would be fine.  Since this is all at audio frequencies, a ground plane is not necessary and it could easily be built using perf bard.  This would be similar to the final stage of the version in my previous post. 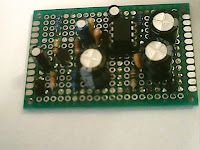 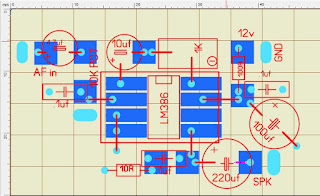 I used some simple  PCB layout  software to position all the parts for easy building either with the pads, or to route or etch a board instead. This allows me to make a smaller bard than just eye-balling the parts placement on  a bare bard.  One thing that I did different from the diagram is swap connections to the plus and minus pins (2,3) on the LM386   That just made layout a little simpler. Since the LM386 has a differential input it will not change operation. 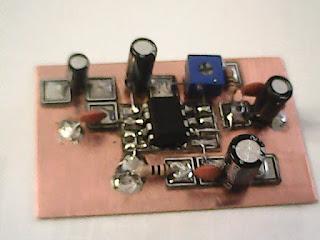 The board turned out very nice.  Not as small as could be done by using proto board, or doing a through hole PCB.  But, was faster than either of those two metnods, and should be fairly easy for the first time builder.  When I get a little time, I will do some testing on the board and see what the actual stage gain is, and how much it can be varried with the resistor.
Should be another group meeting later this week to see how everyone is coming along.  Will keep you updated on the next stage in the project.
Posted by DuWayne at 2:07 PM